2019 was a big year for AB Tasty, we outgrew our offices in Paris and relocated to a larger space, globally our team grew by more than 20% (with 64% growth in the UK and 150% in the USA), added key global strategic leadership roles, got a new look, and brought experimentation to product and tech teams with the launch of Flagship. With all of these positive changes comes challenges. One big question was how do we maintain our culture and uphold our values? In comes the creation of the Culture Officer role and the Culture Crew.

The beginnings of the Culture Officer

To understand the creation of the Culture Officer role and the Culture Crew, it’s important to start with my evolution with AB Tasty. So we will start at the very beginning.

Specialized in Marketing with a MBA in e-business, I used to work for a company that was a client of AB Tasty and as I already liked the image spread by the company and its employees, I applied to join the team as a Customer Success Manager. I joined in 2014, when the company was still a start-up, with only 25 employees and one office in Paris. Joining a fast growing startup was intense (I remember the nights staying at work, to assure clients satisfaction, and our CEOs ordering pizzas and champagne to help us stay motivated!), but it was very fulfilling.

Our small team was successful and AB Tasty grew really fast. After a year and a half, I took a leadership role, overseeing the French CSM team. Only one year later, I was in charge of the entire Client team spread among four countries. This experience allowed me to learn a lot regarding recruitment, as I helped hire dozens (it felt like hundreds) of employees over the years. When AB Tasty realized we had to quickly develop our marketing team, I was asked to take the role of Deputy Chief Marketing Officer and hire new team members while going back to my original field of expertise: marketing. With this new role, I moved to the US (thank you AB Tasty for the mobility opportunities!) to develop the US Marketing team.

After a year in the US and the foundations of the US team built, I realized that in order to reach the sky, we needed to hire a VP marketing who would be able to take  AB Tasty to the next level of its development. I shared this thought with our CEOs, and also told them I was willing to move back to France and be closer to my family. Even though I was moving back, I wanted to keep being a part of the AB Tasty journey.

At that time, there were no job opportunities for me in France, so I took my  retreat day offered by AB Tasty (article to come on that topic) to think about my future within the company.

During that day, I took time to define my main strengths, skills,  the things I’m looking for in my next role, and what I enjoy doing at AB Tasty. Even after so much reflection, by the end of this day, I still had no idea about what role within the company would be good to take on. What I did know was I wanted to stay with AB Tasty because I knew it was where I belonged.

The fun story behind it is that right after my retreat day, I sent the notes of my reflections to our CEOs, and one of the CEOs called me and said, “OK, I’ve read your notes, and what you’ve written is exactly what I wrote on a job description I’m working on for a Culture Officer”.

I had never heard about the role of a Culture Officer until that day. I started researching and realized that indeed, this role was exactly what I wanted to do!

And that’s how everything started…

I quickly found that it was difficult for one person to make an impact in 10 offices spread throughout 6 countries. We needed a team of people. The Culture Crew consists of a member of each AB Tasty office. The main mission for each member is  to spread the AB Tasty values within their office. 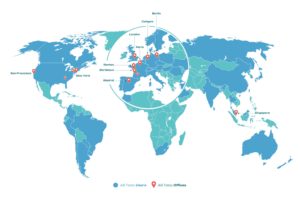 The members are also in touch with me to talk about the office mood and actions that could be taken to improve/maintain the overall office happiness. They also help to deploy any global action in the offices (e.g., hide chocolate eggs in the office after Easter day, hang visuals we want to have in all offices, etc.) to make sure each office lives the same experience and that smaller offices don’t feel left aside.

A year later, many things have been put in place thanks to the Culture Officer role creation and the Culture Crew:

We’ve just started and won’t be slowing down anytime soon!