Specializing in contemporary designer clothing, accessories, and footwear, Flannels is an established UK luxury retailer for the Frasers Group.

The luxury fashion retailer has a low annual frequency of purchases, like many within its sector and, because of this, many of Flannels customers when checking out either forgot they had an account or forgot their login details between return visits. This caused the conversion rate for returning users to drop significantly.

In addition to this, the login page was structurally designed for the majority of visits; guest users. The checkout as a guest option on mobile was below the fold, leading to little engagement or confusion as the option was missed altogether.

Working with Flannels and AB Tasty, User Conversion designed and executed an experiment targeting mobile users only. Here, instead of giving the user the ‘action’, we asked them the ‘option’ explicitly; “do you have a Flannels account?”.

Within this, we added a “Not sure” call to action in a bid to a) understand usage and thus prove the hypothesis and b) assist users, as this CTA then directed users to continue their journey as a guest user. Similarly, all users that incorrectly entered their passwords were encouraged to use the guest checkout option, with some tweaks in the password error validation wording. 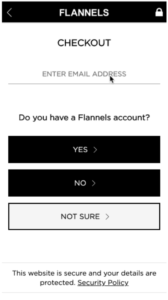 In 14 days, Flannels saw statistically significant results for the primary goal of driving more users down to the next stage of the checkout funnel. Including: +54% increase to guest checkout and +10.8% of users clicked ‘Not Sure’ CTA (these users also converted the highest). One of the learnings from the data was that c. 6% more users actually decided to go back to the cart page instead of using the guest checkout; this was clearly not a desired action from the test.

Test & Learn through Insight and Iteration

Through some effective poll and screen recording analysis, we understood that users were going back to the cart page because they were unsure of what to do on this page. The original variation was iterated on two times to reach the desired outcome. The first iteration was not successful, as +13.1% more users where going back to the cart page who, overall, converted less.

After reviewing the behavioral metrics and looking at the session recording of the variation, an assumption was that a lack of clarity was still to blame i.e. not telling users what to explicitly do. The team then followed up on these hypotheses and learnings and decided to build a 2nd iteration with this insight. 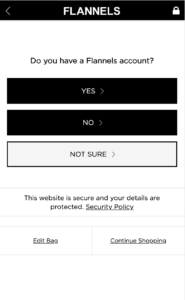 The second iteration proved to be the most successful for Flannels, after running for 22 days. We saw a 5% increase of users clicking the ‘Not Sure’ button. Clarity was key to the success of this experiment.

Using an iterative experiment methodology is designed to continually push the boundaries of the original hypothesis. If we don’t learn from our experiments, we move from one idea to the next with little focus, and therefore little impact.

One hypothesis can dovetail to another based on the learnings and insight gained from the former. In some instances, at Flannels, this strategy has led to a 50% uplift in original hypothesis performance as well as re-proving hypotheses from previously failed experiments.

Even if you get a “losing” test or experiment, this should not be seen as a failure but, instead, a learning. The key to testing and optimization is learning more about your customers and building this back into your roadmap and strategy. Learn, Iterate, Repeat.

For more details and insights on this case study – check out this on-demand webinar with Flannels and User Conversion!